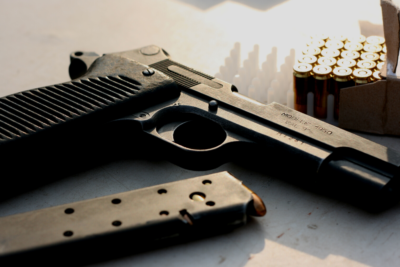 If you’ve been arrested and charged with an illegal gun (or weapons) crime in Kentucky, our attorneys are ready to represent you to the best of their ability. At Stotts Law, PLLC, our attorneys have represented individuals in both Kentucky states courts and in federal courts for violations of various gun and weapons crimes.

Kentucky has some of the most permissive gun laws in the nation. In fact, as of 2019, citizens of the Commonwealth of Kentucky are no longer required to be licensed to carry a concealed weapon, such as a firearm.

However, this right is not unfettered. The right to bear arms comes with laws that serve as restrictions for certain people from owning and/or possessing a firearm. If you violate any of these laws, you may find yourself being prosecuted for a very serious felony-level crime. You may be innocent, or maybe you did not know you were committing a crime by possessing a firearm (or another prohibited weapon). Either way, we will zealously defend you against these charges.

The following is a list of some of the common weapons crimes prosecuted in Kentucky:

POSSESSION OF A FIREARM BY A FELON

One of Kentucky’s few provisions regarding firearms is that felons are not permitted to own one. This is consistent with federal law. Federal law also prohibits convicted felons (who have not been pardoned of their felony conviction) from possessing a firearm. The only cases in which this is legal is when crimes have been pardoned by the President of the United States or the Governor.

Possession of a firearm by a convicted felon is illegal in the state of Kentucky and a Class D felony. However, not all firearms are treated equally. If the weapon in possession is a handgun, it becomes a Class C felony.

DISTRIBUTION TO A FELON

In addition to the law prohibiting felons from possessing a firearm, knowingly providing them with one is a crime. Note, even if the person distributing the firearm is not a felon, this is still a crime. Knowingly distributing a firearm to a subject that is not permitted to own a firearm (such as a convicted felon) is a Class A Misdemeanor.

OTHER WEAPONS IN POSSESSION OF A FELON

This is a less severe charge than possession of a firearm, but some felons still find themselves facing charges for a minor weapon. A felon in possession of butterfly knives, tasers, stun guns, and various other small weapons is a misdemeanor.

DISTRIBUTION TO A MINOR

Knowingly providing a minor with a firearm is illegal. The exception is your dependents. Children under eighteen are not permitted to possess handguns in Kentucky but can have rifles and other long guns (which are often used for hunting).

When a minor is in possession of a handgun, it is a Class A misdemeanor for the first criminal offense and a Class D felony for recurring offenses. Note, these offenses are often prosecuted against juveniles, which occur in unique proceedings (for more information, visit our webpage on Juvenile Justice).

Providing a handgun to a minor is a Class D felony.

POSSESSION OR DISTRIBUTION TO A MENTALLY ILL INDIVIDUAL

Knowingly providing a weapon to a person that you are aware is mentally unstable, or that has made threats to harm another is illegal.

Bringing any weapon into a government building, including the courthouse, judicial building, police station, and detention centers is a crime.

POSSESSION OF A DESTRUCTIVE WEAPON OR BOOBY TRAP DEVICE

Having possession of a destructive device (missiles, bombs, grenades, mines, etc.), with the intent to use for harm, is illegal. This includes having the components in your possession to craft the destructive device. Lacking a legally justifiable reason can also result in a criminal charge.

Bringing a firearm on school property is illegal in Kentucky. Note, this law does not extend to police officers. This Class-D-Felony weapons charge comes with facing a hefty $10,000 fine and up to five years in person.

Removing the serial number from a weapon is illegal. Purchasing or possessing a firearm with no serial number visible is also illegal. Whether you defaced the weapon is irrelevant. Owning a defaced weapon is a Class A Misdemeanor.

HOW CAN WE DEFEND YOU?

If you find yourself or a loved one facing these serious weapons charges, we are equipped to fight for you. We are prepared to explore any defense, including but not limited to:

In addition to these defenses, we will ensure that your constitutional rights were not violated during the course of the investigation that led to you being charged with a weapons crime. If your rights were violated, our attorneys are prepared to file motion(s) that could result in the dismissal of your case.

We would be honored to represent you. Schedule a consultation with Stotts Law and learn more about what we can do to help.

Can Courts Order You to Vaccinate Your Child against COVID-19?

Just when you thought you had this co-parenting thing down – after considerable effort on your part – the pandemic [...]

Can You Modify a Child Custody Order?

The original child custody order that you received when you were first divorced – or first sought an order [...]